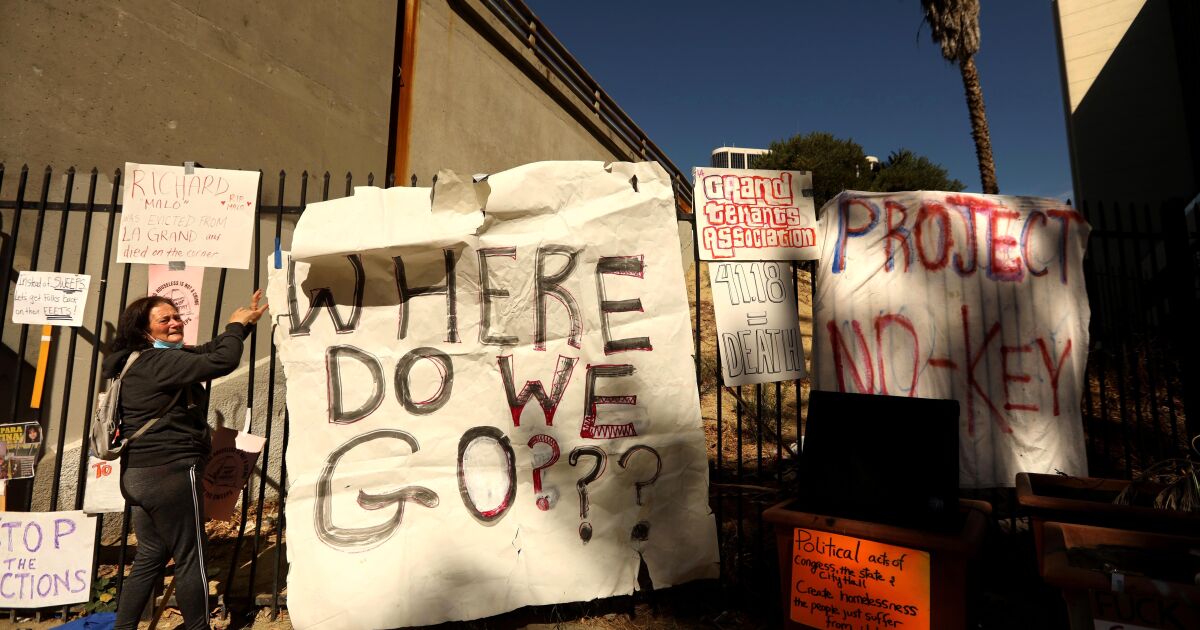 The next mayor of Los Angeles appears to be in line for an early Christmas present.

Measure ULA on Tuesday’s ballot, leading by a considerable margin as votes are tallied, would pump a massive amount of money into homelessness prevention and housing. Several thousand new housing units could be created each year, and rental assistance could prevent thousands more from becoming homeless.

“I don’t think it’s overstating it at all to call it a game changer,” said Ann Sewill, general manager of the city’s Housing Department.

One of the remarkable things about the measure, which is expected to generate between $600 million and $1 billion annually by pumping up the transfer tax on property sales above $5 million, is that it did not originate at City Hall or with any elected official.

In fact, it was an urgent, impatient response to leadership failures, and it dovetails with a progressive shift in city politics. The old guard is now threatened by those tired of waiting for change in a city of deep socioeconomic divides.

The group called United to House LA was led by a sprawling multiracial coalition of labor officials, housing advocates, affordable housing builders, homeless service providers and working people whose jobs are essential but whose housing costs are crippling.

“We had over 830 volunteers on this campaign,” said Laura Raymond, co-chair of the ULA campaign. “One of the things that’s keeping me happiest this week is the number of people who came out to knock on doors, talk to neighbors and make sure they got to the polls.”

Arnulfo De La Cruz, a son of farmworkers, is executive vice president of Service Employees International Local 2015. He said union members who work as home-care aides and at nursing homes were all in on Measure ULA, canvassing and working phones. Not only do those workers witness the housing vulnerability of clients, but they can identify. And like their patients, many workers were disproportionately devastated by COVID-19.

“The certified nursing assistant is really the lifeblood of the nursing home workforce and they make between $16 an hour, and if they’re lucky, $20,” De La Cruz said. “Compared to home-care providers, they’re not faring much better, and the cost of living for both work forces have skyrocketed.”

US Navy veteran Luis Cunal, who was homeless for several years after serving in the Pacific, told me he was riding his bike in South Los Angeles several weeks ago when he dropped into the Community Coalition offices and was told about Measure ULA.

“I had never heard of canvassing, but it hit home when they told me about it,” said Cunal, who ended up working as a door-to-door pitchman for the initiative. “Once you get into that state, it’s hard to get out of homelessness because there’s, like, a stigma to it.”

Joseline Chitay of South Los Angeles hadn’t heard of the measure until her former high school mentor contacted her.

“Once it was explained to me what it was about, I realized how much I needed it as well, because we had been at the point of two wrongful evictions … and it’s hard to get legal aid,” said Chitay, who volunteered for the cause and later earned a scholarship going door to door through the blazing hot summer.

The mentor she referred to is Jessica Melendez, policy director at TRUST South LA, which acquires properties to preserve housing for working folks hit hard by the twin forces of low wages and high rent. Melendez said her group recruited six canvassers to promote ULA seven days a week.

Melendez, a UCLA graduate, said she moved back home with her parents and siblings during the pandemic, when jobs were lost but rent still came due for thousands of front-line workers. Her mother is a mail carrier and her step-father is a truck driver. Melendez and her sister, a teacher, help their parents pay the mortgage.

“People expressed a lot of their vulnerabilities,” Melendez said of the door-knocking campaign, in which proponents of the measure explained the rental assistance and legal representation ULA would deliver. “Especially older Latina women, who talked about why this measure was so big for them.”

Neither of the mayoral candidates, Karen Bass and Rick Caruso, endorsed ULA, even though one of them will benefit handsomely if it passes. The measure was opposed by real estate interests who argued that “mansion tax” was a misleading moniker for the measure, which could stymie sales, be passed on to renters and merchants, and drive investors out of town.

The measure calls for a 4% transfer tax on sales above $5 million and 5.5% on sales above $10 million, compared with the current 0.45% tax. By one analysis, about half the new taxes would come from the sale of commercial properties and about one-fourth from apartment buildings and other multifamily residences.

Advocates argue that the taxes would apply to the few and benefit the many. Unlike voter-approved Proposition HHH, which in 2016 created a one-time housing fund of $1.2 billion, ULA could generate that much annually for years to come.

Eight percent of the money would pay for an auditor general and staff. The vast majority of the revenue would pay for new affordable housing construction and the acquisition of existing buildings for housing, with roughly 30% going to legal assistance and homeless prevention assistance, including subsidies to seniors and disabled people at risk of losing their homes.

An oversight committee of non-politicians will be created to monitor spending, with proceeds expected to create 26,000 new housing units in 10 years and help 40,000 households avoid homelessness.

“This is our first dedicated revenue stream to support affordable housing that is not time-limited, and I think it’s extraordinary,” said Stephanie Klasky-Gamer, chief executive of LA Family Housing in the San Fernando Valley. She said that for certain types of housing, although not all, ULA’s guidelines will streamline the development process and lead to quicker completion of projects.

If the measure holds on to its lead, this won’t be the end of the problem, of course. The city has roughly 42,000 homeless people, an affordable housing unit shortage 10 times that number, a mental health and drug crisis that complicates the challenge of moving people indoors, and a habitually fragmented system of care.

Just as with other initiatives, there will be kinks, hiccups and differences over management and goals, along with the challenge of plowing through the usual inertia and multiagency coordinating complications. City Councilmember Nithya Raman, who has made homelessness a focus and who worked phone banks to promote ULA, said she’s both optimistic and realistic.

“I think this measure is not going to be getting us out of a hole that is pretty deep,” Raman said. “But I think it’s a step in the right direction.”