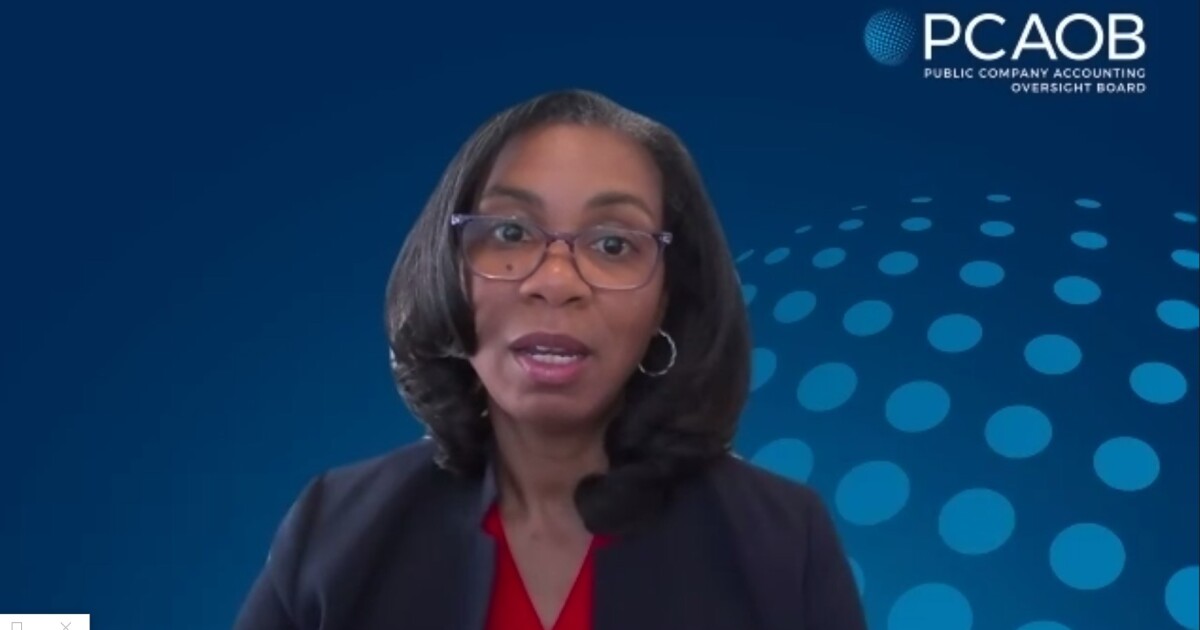 “The board is approaching enforcement with renewed vigilance,” she told attendees of the 17th Annual Audit Conference, held Tuesday by Baruch College’s Zicklin School of Business. “Those who break the rules should know we won’t be constrained by the types of cases the PCAOB has pursued in the past. We won’t be limited to the level of penalties that have previously been assessed.”

“We’ve more than tripled the total dollar amount of penalties imposed against individuals in 2022 as compared to each of the past five years,” she continued. “This includes breaking the record for the largest monetary penalty ever imposed on an individual in a settled case — twice.

“In the past five years, the PCAOB assessed penalties against individuals less than half of the time and against firms only about 86% of the time,” she said. “This year, it’s 100%.”

She also highlighted the board’s strong stance on inspections in China. Earlier this year the board signed an agreement that is supposed to give its inspectors access to the work of Chinese auditors, and the inspection division recently conducted what she described as “groundbreaking” inspection work on-site in Mainland China and Hong Kong.

“In December, the PCAOB will make determinations whether authorities in China have allowed us to inspect and investigate completely, for the first time in more than a decade, or whether they have continued to obstruct,” she said, before issuing a warning: ” Access to US markets is a privilege, not a right. … As I have said many times, the law demands complete access [to Chinese auditors], and the PCAOB will accept nothing less than complete access when we make our determinations. No loopholes and no exceptions.”

Renewed vigilance and stronger inspections are only part of the four strategic goals that Williams has laid out for the PCAOB:

In terms of organizational effectiveness, she highlighted a number of steps the board has taken since she took the helm at the start of 2022, including establishing two new advisory groups (and the board announced a third on Wednesday), and hiring an investor advocate, Saba Qamar, and a stakeholder liaison, Todd Cranford.

She then focused on what she described as “the most ambitious standard-setting agenda in PCAOB history.”

“When the PCAOB was first getting off the ground in 2003, it adopted existing standards that had been set by the auditing profession on what was intended to be an interim basis,” she noted. “Twenty years later, far too many of those interim standards remain unchanged. But as this audience knows better than most, our capital markets don’t stand still. They evolve and grow. Practices change. Technology advances — relentlessly — with an impact on financial reporting and auditing.”

The board is currently working to update more than 30 standards in 10 different standard-setting projects. Just before Thanksgiving, it issued a quality control standard proposal for public comment.

“I called it a watershed moment for the PCAOB,” Williams said. “And I believe it will improve audit quality, because firms’ QC systems lie at the very foundation for how they approach audits.”

While she acknowledged that the board has seen improvement in quality control over time, with the trendline of QC deficiencies found by its inspectors dropping significantly between 2011 and 2020, “It is also clear that progress has been uneven,” she said. “Our inspectors continue to find deficiencies related to engagement performance, independence, personnel management, and other areas. … In cases related to inadequate quality control, the board has imposed close to $2 million in penalties and other sanctions over the past 11 months.”

And she added a final warning: “Let me be clear: If firms can’t reasonably expect to complete audits with professional competence, they should not undertake those engagements in the first place.”